Welcome to the website for the Theban Tomb 110 Epigraphy and Research Field School. Here we present information about the project, as well as a basic history of the tomb and its owner, Djhuty.

Theban Tomb (TT) 110, located along the north eastern end of Sheikh Abd el-Qurna, on Luxor’s West Bank, has recently been the focus of work undertaken as part of ARCE Luxor’s larger APS program of work. From 2012-2016, ARCE’s conservation field school project within the tomb has consolidated the tomb walls and cleaned its pillared and transverse halls. Since 2013, ARCE's archaeology project has carefully excavated the original courtyard, pillared hall, burial shafts, and portions of the chambers attached to one of these shafts. In conjunction with the excavation of the tomb undertaken by ARCE, particular groups of objects have been recorded and begun to be studied by the ARCE archaeologists. These projects are the first step in being able to study and publish this fascinating tomb of the mid-18th Dynasty. 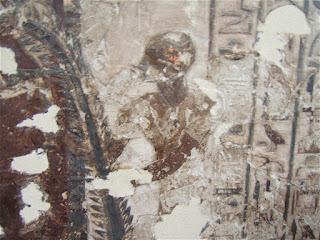 The TT110 Epigraphy and Research Field School project is financed through an Antiquities Endowment Fund (AEF) grant awarded by the American Research Center in Egypt (ARCE), and made possible by the United States Agency for International development (USAID) funding. We are grateful to the Ministry of Antiquities in Cairo for granting permission to carry out this field school, and to the Ministry of Antiquities officials in Luxor for facilitating our work. In addition, the entire staff of ARCE, in both the Cairo and Luxor offices, have been welcoming and generous with their support of the project and facilitated our work in the tomb in many different ways

The field school project currently being undertaken in TT 110 is based on the models of field schools such as those run by AERA and ARCE which train Egyptian Inspectors from the Ministry of Antiquities in archaeological techniques and methodology. The TT110 Field School has two main goals: teaching the necessary epigraphy and drawing skills required to record the tomb, and training the Egyptian students in research and library skills that would provide them with the ability to prepare a tomb report incorporating what they had learned during the school. Thus far, this model has worked exceptionally well for both the epigraphy and research portions of the program. In epigraphy, each student now has a fundamental understanding of why epigraphy is important, what the steps are to undertake an epigraphy program within a tomb or on other carved items, and came away with an “epigraphy tool kit” that contains the tools they need to continue this type of work. In addition, each student was able to completely record a small section of the tomb and produce drawings of publishable quality. Within the context of research, each student was assigned an open, published, tomb to study. They had three main tasks: (1) compare the tomb walls to the record in Porter and Moss, Topographical Bibliography, (2) analyze the epigraphic drawings in the tomb publication for ease of use and accuracy by, again, comparing select drawings to the actual tomb walls, and (3) learn to use the Chicago House library and create a working bibliography for further research on the tomb and its owner. At the end of the season, each student each student presented the results of their independent tomb research to the larger group by presenting their findings (in Arabic) in their tomb.
Although TT110 was partially published by Davies in 1932, the project now being carried out allows us to more fully study the tomb’s decoration and texts, enabling us to clarify the career and family history of the tomb’s owner, Djhuty, and place him, and the tomb, in their socio-historical context. This is particularly important because Djhuty was a royal butler, royal herald, and offerer of Amun at Karnak during the reigns of Hatshepsut and Thutmose III. His status as an important court and religious official is exemplified by the depiction of both Hatshepsut and Thutmose III in this tomb, an unusual feature as generally only one of these kings was depicted. As part of both the Amun administrative elite and the court/civil elite, Djhuty straddled two areas of government whose members played significant roles in Hatshepsut’s rise to king and the later transition to Thutmose III’s sole reign. Thus, a complete investigation of the tomb owner through his excavated and conserved tomb, in conjunction with his other monuments, presents an opportunity to further elucidate a controversial and poorly understood period of ancient Egyptian history.

TT110 and its owner Djhuty
As mentioned above, Theban Tomb 110 is located on the northern end of the lower slope of Sheikh Abd el-Qurna, where it borders on the Khokha hillside. This area was first significantly developed during the reign of Hatshepsut, in part because her own funerary temple is located in the cliff bay just to the north. It is thus the perfect place for TT110, which belonged to the royal butler and royal herald Djhuty, an important official of the palace administration during the reigns of Hatshepsut and her step-son/nephew and successor Thutmose III.

TT110 is relatively typical, if small, for tombs of this period: it faces east towards the cultivation and is a T-shaped tomb with the addition of a pillared hall at the rear, which is where the burial shaft is located (Kampp 1996, 390-92, type VIa; PM I.12, 227-28). Norman de Garis Davies, with Metropolitan Museum of Art photographer Harry Burton, recorded what he could of TT110 in the 1930s and published his results in a short article, along with several line drawings and photographs. At that time, the courtyard and original entrance were buried under the hillside, the pillared hall was filled with debris, and the tomb itself entirely blackened from later use of it as a living space. Despite this, Davies he was able to determine with some accuracy the basic layout of the scenes, and also record many of the inscriptions.
From Davies' work we know that Djehuty’s two primary positions were that of royal butler and royal herald. As a royal butler under Hatshepsut, Djehuty was part of the more “elite” branch of this position, and while his duties as butler may indeed have concerned oversight of the palace’s food and drink, his responsibilities likely went beyond this. He was, for example, also entrusted with acting on the king’s behalf in religious affairs, as an offerer of Amun in Karnak, an action carried out on behalf of both Hatshepsut and Thutmose III. We must thus view him more as an upper-level manager than a lowly servant. Think of him, for example, as a 19th century English butler, who manages the entire household staff, and is also one of the most trusted of the staff by the Lord and Lady of the house. Emblematic of being one of the king’s most trusted officials, under Thutmose III Djehuty’s was given the title of royal herald, an important position that indicated he could speak on the king’s behalf. Although the title is often connected to the military, it can also be held by officials who are part of the court or civil administration, especially during the reign of Thutmose III when many civilian officials worked in Syria-Palestine as part of the king’s war efforts. These royal heralds can be seen acting as “the mouth of the king,” an epithet they often carried, and that was a play on the fact that in this position they often spoke for – and with the authority of – the king.

Davies' work in Djehuty’s tomb also enables us to say that Djhuty represents an especially intriguing official, with a unique tomb, among those who served during the co-regency of Hatshepsut and Thutmose III. One the one hand, both Hatshepsut and Thutmose III are mentioned in his autobiographical stelae, something which is not uncommon among officials of this period (e.g., the tombs of Ineni (TT 81); Intef (TT155); Puiemre (TT39)). However, the manner in which the lunette is carved, or rather, re-carved, is unusual.

In addition, both kings are depicted on the focal (rear) walls of the transverse-hall of Djhuty’s tomb (Thutmose III at PM I.12 (4) and Hatshepsut at PM I.12 (9)). Their joint depiction, along with some elements of the tomb’s decoration as recorded by Davies, for example the fact that only the cartouches of Thutmose III are included on the interior lintel of the door to the passage, and they appear to be original to this king, suggests that it was being finished during Thutmose III’s sole reign, and thus Djhuty not only made the transition from Hatshepsut to Thutmose III, but also served for some time under Thutmose III, and also became a favored official under this king. 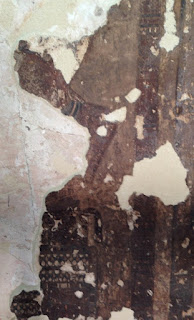 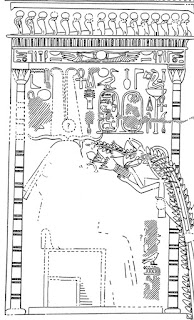 This gives you a sense of who the royal butler and royal herald Djehuty was, and why he and his tomb are of such interest for an epigraphic recording project. Despite Davies remarkable work, with the tomb now excavated, conserved and cleaned, it becomes possible to look at the inscriptions and scenes with fresh eyes and find potentially new information to confirm or change our ideas about Djhuty’s tenure of service under Hatshepsut and Thutmose III, and the timeframe for his tomb’s decoration.